A trip report hosted on The Dive Forum written by Gareth Lock.

In 2007 I spent a week onboard MV Tala which is berthed in Hurghada, Egypt along with a number of other GUE divers from the UK and Europe. This was my first experience of a Red Sea Liveaboard and I was impressed for a number of reasons: the boat is set up for technical diving as a primary configuration which means it is easier to downscale to recreational diving when required rather than try to upscale to handle technical diver requirements; secondly, safety is of prime concern and the whole operation is geared towards safe diving with deep air and solo diving prohibited, and GUE practices actively promoted including banked 32%. At that time there was a link between Red Sea Explorers and UTD/X-Scooters, this has now developed into a firm relationship between GUE and Suex. An example of this ability to mix recreational and technical diving seamlessly was demonstrated when James Sanderson and I helped support an 85m/2.5hr dive on the Al Qumar (?) by John Kendall and Dave Smith, whilst a shallow reef dive took place for the other divers on the boat at the same time.

Roll on six years and I had the opportunity to get back to the MV Tala for week organised by Phil Osborn with a number of other GUE UK divers, Jesper Kjoller and his wife and some Lebanese friends of the owner. The original plan was for a Northern Wreck route taking in the 4 wrecks on the Abu Nahas reef, the SS Thistlegorm, the MV Salem Express, the SS Rosalie Muller plus some reefs in the area for those interested in the prettier side of diving! However, this schedule changed and we were now going to take in the Brothers Reefs lying in the middle of the Red Sea; these are pinnacles which rise more than 900m from the surrounding seabed provide shelter and a haven for many examples of marine life, including some of the larger pelagics including sharks and rays. Whilst this was disappointing for some as we were potentially going to lose some of the original wreck diving, it did mean that we had the opportunity to dive with sharks and visit the Aida and Namidia wrecks on the steep walls of Big Brother.

The weather was much warmer than I had previously experienced with air temperatures in the mid to high 30s (degrees Celsius, not Fahrenheit!) and water temperatures in the high 20s. I had planned to undertake some Tech 2 level diving so was diving dry with a very thin thermal layer under my TLS350. My main buddy, Richard Whalley, was also diving dry. As it turned out, the slick surface operation and very windy conditions topside meant that we weren’t too hot, especially after the normal 60-75 minute run times conducted 3-4 times per day.

After a compulsory check dive including demonstrating dSMB deployments, we moved to a couple of reefs. I am not normally a reef fan with my diving more focussed on wreck photography (no pun intended!) but I was pleasantly surprised especially as the current picked up and we had a fast drift dive over some large gorgonian fan corals plus encounters with rays and eels on the way. The first full day closed with three of the GUE UK divers undertaking Pilates with one of the Lebanese divers whilst the sun set over Hurghada. Not something you see from UK divers very often!! The following morning, my core muscles certainly knew that we had been exercising the night before!!

Read more on the forum…http://www.thediveforum.com/trip-reports/5733-red-sea-explorers-mv-tala-gue-uk-some-others.html 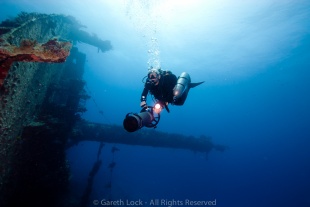 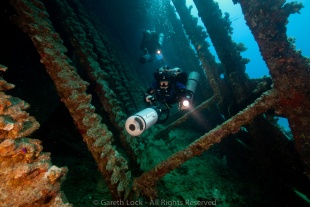 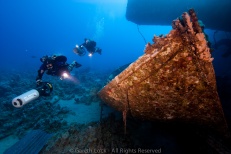 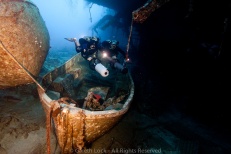